Happy Sunday, Sudsers! How’s your weekend been? Mine has been filled with making soap. Obvs. But this weekend was a bit different as I am replenishing back-stock of all of our standard soaps to (hopefully) get through the rest of the year. Next week the holiday production will begin and be in full swing through the end of the year, so I won’t have time to make a quick batch of Hello Gorgeous if I notice we are running low in November. This weekend I made tub-loads of beer soaps, and I thought it was a good time to showcase the awesomeness that they are in a Sunday Soapcase!

Bad for your liver, great for your skin. I love beer. It smells nice, it’s refreshing on a hot summer day (or on a Sunday afternoon in September after your team got annihilated on the field). I’m not actually much of a beer drinker, though – I think my liver is still recovering from my university days when life was not complete without a daily hangover. I am fascinated with the production of beer; you can put some really off the wall stuff into it! For those of you that are local to the Tacoma area, I highly recommend stopping by The Station U-Brew in Puyallup and experiencing just how off the wall you can get with beer making. You can put chilies in beer, or lavender, or citrus fruits. Walnuts and wheat, hops grown in specialty soil – there is no end to beer making options. This is a lot like soap! You can put a lot of weird stuff in soap, too. Sometimes it turns out, sometimes it’s a bad idea. Beer in soap, however? A great idea. After testing a batch of beer soaps, I was hooked. I liked using beer as the liquid in my soap recipes so much that it can be found in several other soaps, including a men’s shave puck and a rustic beard wash.

Before we get too deep, no I don’t make Soap & Clay’s beer soaps smell like beer. While I do like the smell of beer, I don’t believe that most people want to go to work smelling like a dive bar. Instead, I draw from the ingredients used to create beer for my scent inspiration. Bright and crisp citrus beers, warm and creamy oatmeal stouts, spicy and earthy chilies – these ingredients smell delightful and make excellent base notes in a beer soap. Each of the soaps in the beer line, while made from beer, have delightful scents that will not leave you smelling like you just left the bar. Which is a good thing for that whole adulting business we have to do every day. So what are the benefits of beer soap? Lots, as it turns out. As I mentioned earlier, beer is made from botanicals that are great for the skin (think citrus, oatmeal, etc.). But beer’s primary ingredients create a bar of soap that moisturizes, detoxifies, helps acne, and softens the skin.

Take, for example, hops. Hops are chock full of amino acids, which soften the skin and soothe inflammation. Amino acids are great for skin and hair alike, so if you’ve an inclination, try any of our beer soaps as a hair bar. You’ll like it, I promise. .

Beer soaps also have an amazing lather in their own right, but when paired with the clays that are used in each and every batch of soap created by Mrs. Soap & Clay, the lather becomes something extra special. Big and bubbly with an almost effervescent feel, the lather on a beer soap is something OG Sudsers and Noobs alike will appreciate.

In addition to the lather and softening, beer soaps work hard to detoxify the skin and help combat acne. The clay in the formulations further amplifies this detoxification. Basically beer+clay=awesome. Making beer soap can be a bit tricky and yields a thicker soap batter, though, which is why Mrs. Soap & Clay chose simple designs reminiscent of a pint of beer for this line. So there you have it, Sudsers! Lots of cool beer stuff in one awesome soap. Be on the lookout in the next few weeks for a beer (and wine!) soap gift set – I’m waiting on Mr. Soap & Clay to finish up some soap dishes before putting them on the site but they will be there soon! In the meantime, check out the link for more information on these soaps and use the coupon code below for a special deal!

Have a favorite beer soap? Haven’t tried one yet? Either way, use coupon code BEERME for a bar of soap from the beer line on me.* 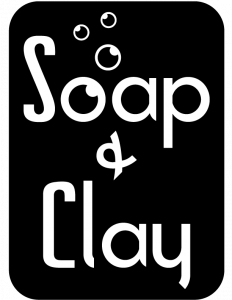